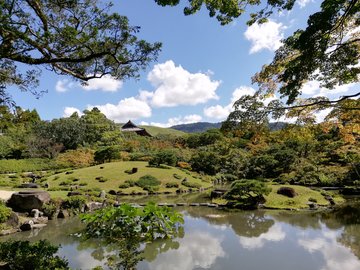 Nara was Japan’s first permanent capital. Established in the year 710, the city was the center of Japanese culture, religion and politics until 784 when the capital was first moved to Nagaoka and a few years later to Kyoto. The city remains full of historic sites including some of Japan’s oldest and largest temples and shrines, like the Todai-ji, housing the famous Daibutsu (Great Buddha) and Kasuga-Taisha, famous for the thousand of stone and bronze lanterns. Both the sites are part of Nara Park a beautiful expanse of trees and open spaces lined with pleasant pathways and dotted with ponds. The parks’s major attraction is however the hundreds of deer that roam freely for the joy of children.